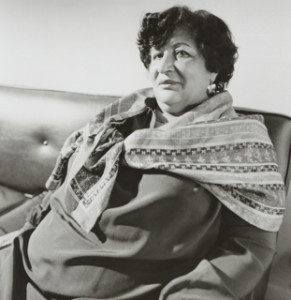 Evelina López Antonetty sparked energy, strength and courage into these words, standing out as woman, mother and champion of the Puerto Rican community. She was the biological mother of three; the grandmother of five; the inspirational mother of the young Latino leadership; the mother of mothers who found themselves in a strange, cold land whose language was both harsh to their ears and confusing to their minds. She was a mother of the civil rights movement, huddling her diverse children of many hues in the bosom of her solidarity; the mother of the South Bronx, giving birth (after a long, hard labor) to United Bronx Parents, Inc.; the mother of our roots; and, with all the fury of a lioness protecting her young, Evelina López Antonetty was a mother to those who would oppose this frontline fighter for freedom, dignity and unity among all people.

Born in Salinas, Puerto Rico the eldest of three daughters, Evelina arrived at the home of her aunt in New York’s “El Barrio” at the tender age of eleven. It was the height of the depression, the backdrop for the basic scenery of her life. It was here that she was touched by the vibrant spirit of her Tía Vicenta’s active community and political participation. Her aunt’s fervor for social justice was Evelina’s sustenance throughout those formative years.

Her extended family was eventually united in New York providing a concrete bond of love and nurturance during those trying times. By the late ‘30s, the teenaged Evelina could be found out with her aunt conversing with leaders such as Jesús Colón, involved in political campaigns with Vito Mark Antonio in East Harlem, helping people handle evictions, translating information and cutting her teeth in grass-roots organizing. Her active efforts with the unions lead her to become one of the first Latinas hired by District 65 opening many doors to thousands of others looking for union jobs.

After her marriage, Evelina moved to Jackson Avenue in the Bronx. Once her children were in school, she began to organize again this time lobbying for the development of the Head Start programs, later to become the Supervisor of the first Head Start center in the City. Her inner light shone.

She organized the Bronx for the Lindsay administration under the Puerto Rican Community Development Project. There she found herself listening to the cries of confused parents whose children were tested in English, then placed in mental development classes for slow or impaired students. Evelina organized parents in sit-ins and demonstrations. She demystified the arrogance and authority of teachers and professionals who were misinterpreting the culture of our heritage while breaking the spirit of its future. She inspired the inherent dignity and pride of the community to prove that despite language barriers and poverty, one still possessed the right to self-determination and control. Educational policies changed. Para-professionals, many of them the same parents who previously felt helpless, worked alongside teachers.

Evelina struggled alongside blacks, whites and Latinos in negotiations that lead to the decentralization of schools fought out of Brownsville, Brooklyn. She was a visible and vocal member of the anti-war efforts surrounding Vietnam. She believed in direct and active action among people and with this belief she orchestrated many successful demonstrations and take-overs. From one aggressive action on an empty storefront, the United Bronx Parents (UBP) was born in 1965 out of an effort to oust a teacher sexually abusing children.

By the 1960s, the country’s newfound interest in peace, knowledge and just causes held nothing new for Evelina López Antonetty. Her concern for youth took her to the streets to work with gangs and young radicals. Her concern for the community moved her to leadership in the struggle for community control over Lincoln Hospital. These efforts lead directly to the building of the new complex.

Through it all, Evelina never lost sight of her people or her children. Every morning, she’d nourish the proud UBP Center with her greeting, “Aqui ‘stoy.” Every visitor was welcomed with a warm smile and a tender embrace. She found time to brew fresh coffee while introducing every single member of her staff. From very early on, her own children knew their mother was to be shared. “Many times we had to wait on line to come to her with a problem,” recalls one of her daughters. “But we were proud of her because in this way, she taught us independence and self-determination.”

Independence and self-determination; these were the precepts Evelina dreamed of for her community and for her beloved island. She was a moving force behind the Comité Lares in the U.N. celebrating the Island’s uprising against Spain while demanding the inclusion of Puerto Rico on the agenda of the General Assembly. She lobbied for the release of the five Puerto Rican Nationalists and rejoiced in tears of joy upon their release. Her passion for freedom notwithstanding, she managed to work within the system. She broke bread with every minority group member and institutional policy maker, bringing down the barriers of fear, race and intergenerational confusion.

Meanwhile, United Bronx Parents burgeoned into a full social service agency committed to community empowerment. It was a space filled with creativity and energy. And with Evelina at its helm, it managed to reach far beyond its Bronx based borders affecting every major institution in the Tri-state area while influencing public policy across the nation. Evelina was at the building of Hostos Community College and supported the student’s demand for a bilingual/bicultural educational curriculum. She was one of the forces behind MADRE, a national organization in support of Nicaraguan women. She fought against the stereotyping of our community as a member of the Committee Against Fort Apache when she called for the boycotting of exploitative movies. She taught women about themselves and their strengths without undermining the faith of their men. She was a delegate member of the White House Conference on Children and Youth and was affiliated with national and local organizations too numerous to mention. She was presented with many awards and citations, among them the Fanny Lou Hammer Awards from Women for Racial and Economic Equality, the Abraham Lincoln Award for Human Services and an Honorary Degree in Humane Letters from Manhattan College.

Her love and commitment to community flowed straight from the heart, generous and abundant, as was her passion for social justice. She was constantly and consistently motivated by the fires that stirred her heart and in the end it was her heart that proved the most vulnerable.

Evelina was the epitome of Woman and with that force; she was a mother to us all. She moved her comrades and friends as well as those youngsters who only heard of her through word and deed. She embraced young leaders breathing breaths of inspiration into their souls. She took care of the sick and needy instilling strength and conviction where once there reigned fear.